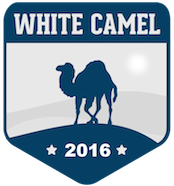 For 2016, the White Camels recognize the efforts of these people whose hard work has made Perl and the Perl community a better place:

You've run across David's work behind the scenes of the Perl community, and probably recognize him as "xdg" . He could have received a White Camel in any category. He's a constant force in establishing consensus for the Perl toolchain, the QA workshops, and many other social constructs that make everything work together. Besides that technical work, he's also one of the organizers of the New York Perl mongers.

For years, Karen has been on the shortlist of people nominated for a White Camel Award for her work as the president of The Perl Foundation. For several years she has kept the gears turning, oversaw various major improvements in management, and putting everything in good order. This year she has stepped out of her role in TP. Since she's no longer part of TPF, we can recognize her with this award. Mark Keating has a much longer discussion of her work at TPF.

Thomas Klausner ("domm" to many people) of the Vienna Perl mongers literally works harder than everyone else to get to Perl events. Starting in Vienna, he cycles to many events. He's worked as an organizer for several workshops in his area (most recently the first Alpine Perl Workshop). He's a core part of the conference community even if he doesn't boast about his work.