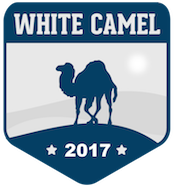 For 2017, the White Camels recognize the efforts of these people whose hard work has made Perl and the Perl community a better place:

Laurent Boivin has been the treasurer of Les Mongueurs de Perl since 2009. For a long time he was the force behind OSDC.fr (maybe returning in 2018) and instrumental in organizing several French Perl hackathons, including two QA Hackathons, a Toolchain Summit, and several patch.pm. It's these sorts of behind-the-scenes non-technical work that keep all of these wonderful events going.

Rob Masic is one of the co-founders of Evozon through which much Perly goodness flows. Evozon hosted YAPC::EU 2016 in Cluj and sponsors many other Perl events around the world. They support the local Perl mongers group, Cluj.pm. They donated time with their graphic designers for YAPC::EU 2014 in Sofia and for various Perl website redesigns. They created BuiltinPerl. Without the generosity of the entire company many of these things couldn't have happened. (Amalia Pomian from Evozon was a 2014 White Camel Award recipient)

For 17 years Kurt Demaagd handled the boring bits of The Perl Foundation (that's over half of Perl's age now). He was one of the founding board members and the original treasurer (serving 10 years in that role). He moved the money and took care of compliance issues--tasks not to be underestimated in either their importance or lack of recognition.

Congratulate them for the recognition, very deserved by the way. And thank you for all the effort you have done for so many years.

I've pinged Gabor. The site source is in https://github.com/szabgab/whitecamel.org