As many people know by now, Ricardo Signes recently announced that he will be standing down as pumpking once Perl 5.24.0 is released, after four and a half years in the role — not to mention an unprecedented five stable 5.x.0 releases of Perl!

Since the Perl QA Hackathon is the first Perl event Rik has attended since his announcement, we thought it would be fitting to offer Rik a token of our appreciation for the remarkable and tireless work he’s put in during his service. So we closed up the second day of the hackathon with a short presentation and a small expression of our gratitude (and hopefully one that Rik didn’t find too embarrassing!) 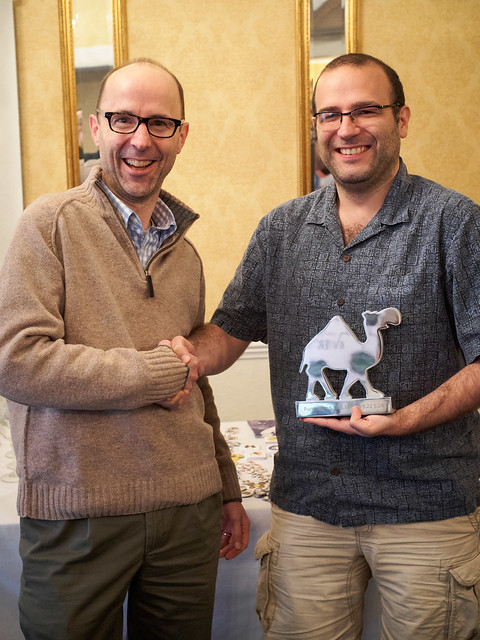 The Camel was presented by Tim Bunce, who had a few words to say:

As individuals we are scratching our own itches, so as a group we’re naturally chaotic. Providing leadership to such a group is both challenging and invaluable.

For the past five years we have had the great good fortune to have Rik providing that leadership. As you probably know Rik is stepping down as Pumpkin after the release of 5.24.

I tried to write a list of Rik’s qualities but, damnit Rik, there are just too many!

As a small token of our appreciation and gratitude for all your contributions, to the language and the community, we’d like to present you with this Silver Camel.

Then Philippe Bruhat (BooK) offered Rik a bottle of fine chartreuse, saying this:

Ricardo reminded me yesterday that I was the one who introduced him to Chartreuse. That was in Paris, at the 2012 Perl QA Hackathon… about a year and a half into his reign as a pumpking.

I’d like to think it’s been one of his fuels for doing such a superb job and keeping at it for so much time and so many Perl releases.

Now that he’s retiring, I wouldn’t want him to run out of steam…

After that, I took up the baton to present Rik with some more drinks we thought he’d like:

It’s so hard to condense the list of everything Rik has done for Perl and for p5p. I think all I can say is that it’s his tireless efforts to make p5p a nicer place to be that inspired me to accept being one of the p5p moderators.

We’ve taken some advice from some of Rik’s friends on what would be a suitable token of our appreciation, and we’ve heard that interesting gin, vermouth, and whisky would go down well. Rik, fingers crossed that stepping down as pumpking will let you drink them for pleasure rather than merely to forget.

Not all of you may know this, but Rik collects notebooks for writing todo lists and other things in. He has a shelf full of them at home, many of them unused. Now you’re going to have more time on your hands, we thought you might need another notebook! We expect you to bring it to next year’s QAH, filled in, and to ensure you don’t try and pull a fast one, we’ve all signed it for you.

Rik, there’s nothing else to say except: thank you!