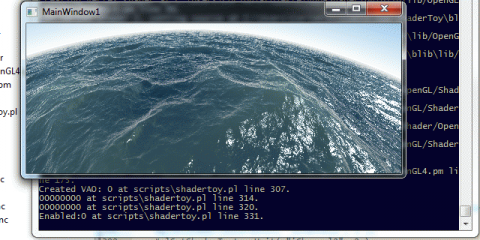 The app runs on Prima, but until I've worked out how to best integrate everything into mainline Prima::OpenGL on Windows, you will need to fetch a patched version of Prima::OpenGL from my Github repository.

The gif below doesn't really do it justice, but on my machine, Perl obviously is able to run the shader at 60fps. As Perl only has to do 14 OpenGL calls per frame, there certainly is room for more interesting things soon.

This wouldn't have been possible without the work of Mithaldu and Chris Marshall, who provided encouragement and hopefully will pick up my work and integrate it into OpenGL mainline proper.

Also, the original author of the "Seascape" shadertoy, Alexander Alekseev aka TDM, needs to be mentioned, because what good is a nice engine if you don't have assets to display in it.

The source code including my OpenGL::Glew temporary experimental XS module lives on Github, and it is "Works on My Machine" certified. I haven't tried the changes with an Intel integrated graphics card and certainly not on other operating systems.

Can you have it draw the received mouse position to see what the input latency is like?