The Perl Conference in Riga

Short version: I'll be there.

Long version: people have been asking me why I've not been as visible in the Perl community as I used to be (including at least one person asking if I was still involved in Perl). Well, that's a long story.

Our company, All Around the World, is called in when there's a hard problem to solve, or a company simply doesn't have enough resources to get things done. We work remotely and I even give guidance on how to build and manage remote teams. Keeping clients happy is important, but very time-consuming. Ironically, companies approach us because of my heavy involvement in the Perl community, and this lessens the amount of time I have for the Perl community. But I've squeezed it in anyway.
Until the last year or so.
Leïla, my wife, had a serious accident snapping a tendon in her leg and she was bedridden for months. She continued supporting our clients and managing projects but it was stressful and made home life very hard to coordinate.
Leïla had a darling cat, Nils, who also had a serious accident, almost losing his leg. Nils was stuck in bed with her and often tried to remove the support from her leg because he couldn't remove the one on his own. He became her cat, following her everywhere after she could walk again. They loved each other. Then he was run over by a car. 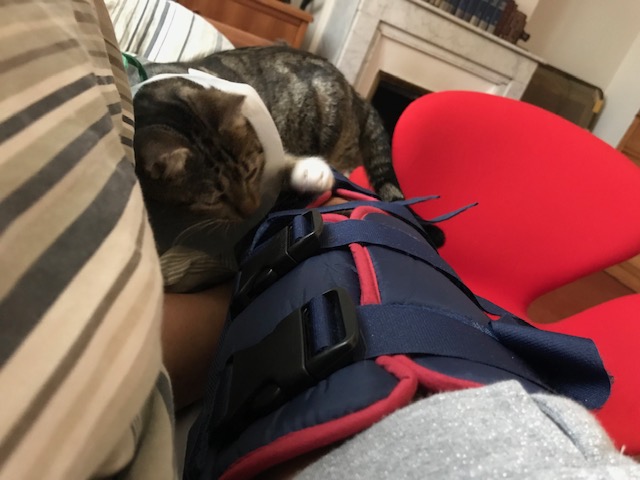 And my mother, living in the US, now has serious dementia and is constantly surprised that I don't live in Texas. Family's trying to figure out the best way of arranging care for her, but it's hard, I live far away, and she doesn't realize anything's wrong.
And then my father had two strokes and wound up in permanent care where, curiously, they took away his beer but apparently let him keep smoking.
And recently we brought our daughter's two kittens to the vet's office and the veterinarian told us to not hold out hope they would survive. Our daughter was spending two weeks with her grandfather and neither Leïla nor myself knew how we were going to tell her that her new kittens suddenly died. We got lucky on this one, the vet was wonderful and we brought the kittens back home after several days.
And then my father passed away about three weeks ago. I wrote a eulogy for him. You should read it; you won't regret it.
So to say this past year has been awful is an understatement. It's been "Ovid and the Terrible, Horrible, No Good, Very Bad Year." But the client work is going well, we're still building Tau Station, but I've been pretty much unresponsive on bug reports for my open source code, I haven't been blogging much, and I've missed more than one Perl event.
So my wife and I were talking and she decided to channel Arnold Schwarzenegger from the good Total Recall movie: "get your ass to Riga."
Except she would never use language that crude. And we decided this the day before a significant controversy over the conference and one of their speakers broke out. I had just made up my mind to go when it looked like going might send the wrong signal to the Perl community. But when the controversy was still going on, I quietly let the conference know I would be there anyway and they were quite happy to hear that, given how everything else was going to hell.
Fortunately, the controversy abated as many people involved stepped back, cooled down, and apologized. As for the conference organizer, Andrew Shitov, I feel a lot of sympathy for him. Things blew up on his birthday and he was looking at a year of hard work getting thrown away because of something someone else did. Hoo boy.
So there it is. We've had a very challenging past year. We've made some clients very happy, we keep building Tau Station (check out our archives, you don't need to be logged in to browse them), and I'm going to try to participate in the Perl Community some more. I've missed you :)

For some reason, you and Leila were not invisible to me. Well, in real life, we did not meet, but online, we did. I followed some of your life from the sideline. I admire you two (three, I should not ever forget Lily-Rose). I am happy things are getting a bit better (I hope they do). And I am very happy that I will meet you in Riga.

Thank you Wendy. We're actually friends on Facebook who, unlike many others, are real friends :) Give Liz a hug for me and I'll see you in a few short weeks.

Looking forward to meet you at Riga. I still remember my first interaction with you at German Perl Workshop in the year 2017. You may not remember that but I fondly remember such events.

I'll be very happy to see you in Riga.

Beginning Perl has brought such joy to me as a nonprofessional Perl enthusiast. Best damned technical book I've ever read. THANK YOU.

Yikes. Sorry for the rough year and hope things smooth over soon.