What’s in a name? that which we call a rose By any other name would smell as sweet; (William Shakespeare, Romeo & Juliet, Act II Scene ii)

I went to FOSDEM in Brussels this year as a representative of the Perl Foundation. As such I spent the weekend doing my best to be a good advocate of the Perl programming languages.

FOSDEM for those of you in gentle unawareness is probably the world's largest, free, Open Source event. It is held each year in Brussels, Belgium, and attracts speakers for hundreds of talks on dozens of projects, languages and distros. The event is attended by over seven thousand people from almost everywhere in the world.

Each year the Perl Community is fortunate that Claudio, Wendy and Liz organise a Perl table, developer room and social event. I attended last year as a member of Shadowcat and like many other Perl volunteers helped on the table. This year I was proud to be at FOSDEM to represent the Perl Foundation and use the time as advocacy about Perl and our community.

A Little on the Construct
The weekend took the following shape for both myself and Tom Bloor, who was paying his own way from the UK, but he was happy to help out:

Saturday
Arrive at the event early morning (07:45) to help set up.

This was to unpack the truck, books, shelves and banners. By the time other volunteers arrived we had unpacked the van and started with the books. 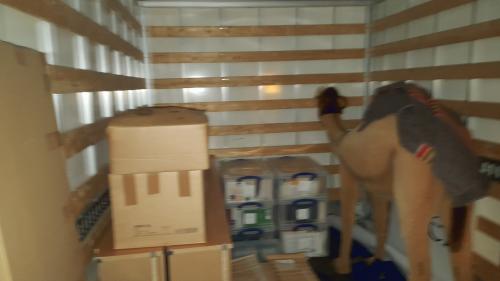 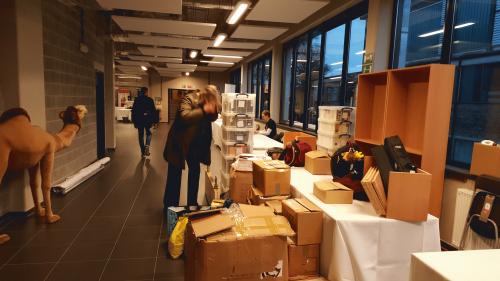 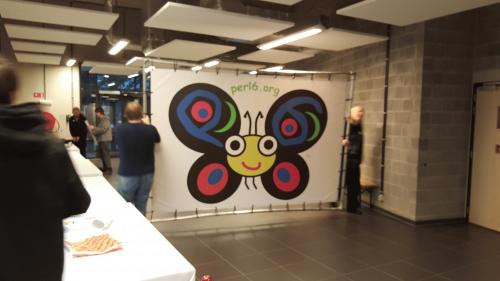 Man the stand (stood for the most of the time chatting and helping answer questions) until 18:00 and the close of the day.

The manning of the stand involved talking to people about the newly released Perl6, the latest changes in Perl5, the changes in the community over the years, available jobs, the organisations, and for many what is Perl and who we are,[1] along with any other questions.

These are all elements that we in the Perl world have good understanding of but are invisible outside. 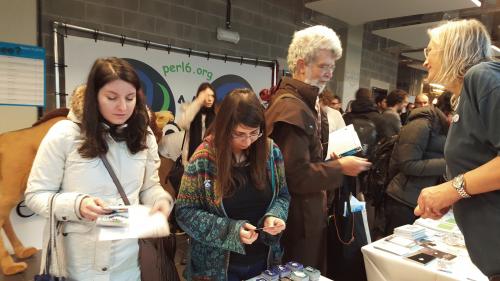 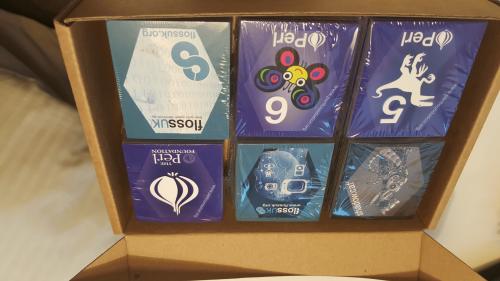 This is a great little sub-event inside our local Perl presence with fellow community members arranged by Liz and Wendy And a moderately sized bunch of Perl folks (somewhere around 50 people).

Sunday
Arrive at the event early morning (07:45) to help set up.

Today I was on the stand all day and Tom would be making back-up videos in the Perl Dev Room to make sure that all the Perl talks were captured.[2]

Being early meant that I was able to straighten the stand and get the merchandise ready for what would be another long day for Wendy and I at the Perl booth. 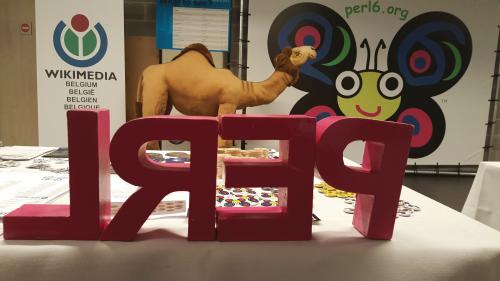 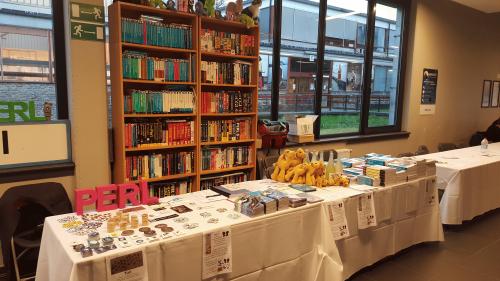 I should point out that a number of people also come to the booth during the two days to help out. Curtis, Steffan, Liz, Salve, Mark Overmeer, Theo, Paul Evans, Sawyer all took turns being the relevant expert to answer the more difficult programmer questions.

Sunday also saw Wendy, Curtis and I interviewed for the Hacker News podcast, so at some point I have to brave myself to go and listen to the cast with me in it. 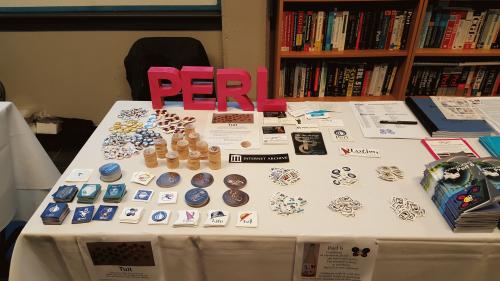 The end of the day.

On Sunday is always a scramble to pack the booth. Wendy and Liz bring a large amount of items to FOSDEM and so we were all grateful that so many people turned up to help us pack. There were so many that we had to send people away. All of you that helped, in whatever manner, have our gratitude.

Success Story
FOSDEM felt like a success this year for Perl and the Perl community. Despite a longer than anticipated gestation period we had the release of Perl6 last Christmas, and we were able to talk about this with great pride. We have both the oldest and youngest of the so-called scripting languages.[4]

We also have a lot of good things happening in both Perl languages. Perl has two running success stories and as marketeers, Wendy and I consider ourselves as such for these types of events, that really helps.

The sheer amount of material we gave away, the number of camels and books that were sold and the constant stream of people we spoke to is testament to some level of interest in Perl. It only remains to see how we continue to grow on the multiple languages, and how we can use that to further advocate our strong, and vibrant, community.

On the subject of multiple Perls, I found it easy to explain why there is a Perl5, a Perl6 and even a RPerl in existence. I was able to discuss easily that despite the numbers Perl5 was the name and so Perl6 is just a name, they were both languages. For the most part people who have little understanding, or a historical knowledge of Perl this was easy to grasp, so after all that 'what's in a name?'

So Romeo would, were he not Romeo call’d, Retain that dear perfection which he owes Without that title. (William Shakespeare, Romeo & Juliet, Act II Scene ii)

Notes
[1] A good number of the people at FOSDEM are students who are new to the many different languages available.

[2] There have been issues in previous years, although a great number of improvements are made each year by the FOSDEM staff.

[3] As a side note there are some people who still think having multiple official Perls is problematical. However aside from the expected occasional jibe, intended to provoke that we skilfully ignored and derailed, there was little contention.

[4] I know there are some that will doubt the use of youngest in this post but I will cover that discussion elsewhere.

Thanks for posting the pics! This is all very inspiring news...

In other news, I now want a giant plush camel :P