Isn't it amazing! There are people in the community - true celebrities, international travelers, writers of several popular books, authors of bazillion modules, record holders on stack overflow - who not only want to come to your local or not-so-local Perl event but even want to work for their compensation.
And hey, sometimes they go as far as starting a Kickstarter campaign for you to fund that work.

For the Swiss Perl Workshop 2014, brian d foy does all the above, and more. He is giving a keynote, teaching his "Become a CPAN Author in 2 Hours", hanging out at the "Hack and Talk"-Track, and whatever we come up with in the next weeks.
The best though is that he stays for another few days. On September 9 and 10 he is going to teach "Mastering Perl" in Zürich. To make the class interesting and available to even more people, he started a Kickstarter campaign.
Only few hours into the campaign, it is already doing very well: 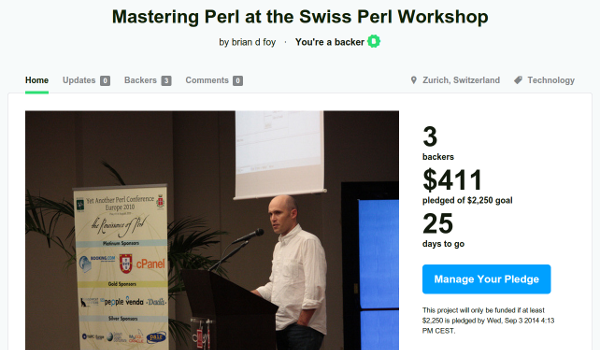 You don't have to go to the Swiss Perl Workshop to contribute. You can sponsor a student to go to my classes!

I'm also sending out signed books as a reward. You don't have to attend to get that.

News about the Swiss Perl Workshop.