One of the reasons I have not "moved on" from Perl to some other more "modern" language is that Perl gives me such great access to its inner workings. The Do-It-Yourself Lexical Pragmas post from a couple weeks ago is an example of this. Another example is that Perl lets you tie your own code into its warnings system.

Tying into the warnings machinery requires a module. That is, the interface assumes you are reporting problems relative to another name space that invoked your code. Your module can either add diagnostics to existing Perl warning categories or actually create new categories. In either case your diagnostics are sensitive to the enablement or disablement of the category, as well as its fatalization.

In addition to enabling or disabling warning categories, use warnings ... and no warnings ...; make some subroutines available which can be used to issue your own diagnostics. These are reported relative to the file and line that called into your module (sort of like carp()). A useful subset of the warnings:: subroutines is:

END_OF_DOCUMENT_TOKEN_TO_BE_REPLACED

These are some answers to the Week 147 of the Perl Weekly Challenge organized by Mohammad S. Anwar.

Spoiler Alert: This weekly challenge deadline is due in a few days from now (on January 16, 2022 at 24:00). This blog post offers some solutions to this challenge, please don’t read on if you intend to complete the challenge on your own.

Write a script to generate first 20 left-truncatable prime numbers in base 10.

In number theory, a left-truncatable prime is a prime number which, in a given base, contains no 0, and if the leading left digit is successively removed, then all resulting numbers are primes.

END_OF_DOCUMENT_TOKEN_TO_BE_REPLACED

In which we leap tall primes in a single bound, mis-take a tree, test percussion, and find the limits of a Curious Module.

Task 2: Curious Fraction Tree - Solutions in Raku and Perl (with 200+ tests), and another Perl solution using a CPAN module.

END_OF_DOCUMENT_TOKEN_TO_BE_REPLACED

Perl Club starts to translate Japanese Perl Tutorial to English. Yuki Kimoto is one of the Perl Messengers.

Perl Club decides to write all articles English at first.

This is a first English-first article.

END_OF_DOCUMENT_TOKEN_TO_BE_REPLACED

In the context of Perl, a closure is a piece of code that captures a specific instance of a lexical variable. A blog entry a month or so ago explores this in greater detail. If you review this blog entry, though, note that it does not cover lexical subroutines, which act more like anonymous subroutines even though they are named.

This blog entry, though, covers the closure warnings category.

END_OF_DOCUMENT_TOKEN_TO_BE_REPLACED

These are some answers to the Week 146 of the Perl Weekly Challenge organized by Mohammad S. Anwar.

Spoiler Alert: This weekly challenge deadline is due in a few days from now (on January 9, 2022 at 24:00). This blog post offers some solutions to this challenge, please don’t read on if you intend to complete the challenge on your own.

Write a script to generate the 10001st prime number.

Raku has a fast is-prime subroutine or method, using the Miller-Rabin algorithm, to test whether a integer is prime. We can just generate an infinite (lazy) list of prime numbers and look for the 10000st one.

This script displays the following output:

END_OF_DOCUMENT_TOKEN_TO_BE_REPLACED

Pssssst... I DO NOT KNOW WHAT I AM DOING.

Continuing from our last post, I talked about how ANSI Game Engine is a colourful telnet server. We left off with needing to fork the engines telnet server.

Player 2 has joined the game!

Time to level up our telnet server and make it multi-player with some knify forky. 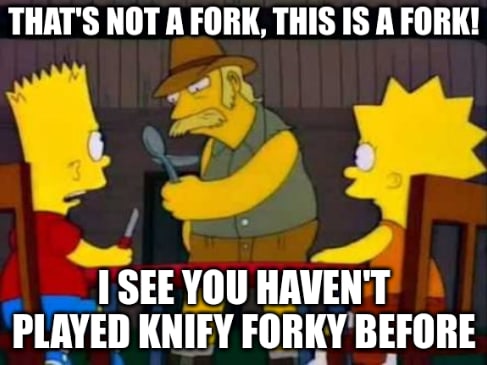 I've added in the strftime identifier from Perl's POSIX module to help with time stamping the output. The setsid identifier is for starting a new session and group ID for each forked process. A.K.A, the child process. :sys_wait_h is for returning without wait after the child process has exited, using the WNOHANG flag when calling waitpid(). This provides non-blocking wait for all pending zombie children.

END_OF_DOCUMENT_TOKEN_TO_BE_REPLACED

This will be very short even if that take me a lot of time to figure this part.

In my ASM65816Grammar.rakumod I manually wrote the Number and Addressing grammar but obiously for the instructions it's not really possible.

You have an instruction per line, or you can have multiple instructions separated with a :, and ; are used to mark a comment.

END_OF_DOCUMENT_TOKEN_TO_BE_REPLACED

The phrase "Lexical Pragmas" is probably both redundant and ungrammatical (the correct plural of "pragma" being "pragmata", I believe). But the use of "pragma" to mean "Perl module with an all-lower-case name" is fairly common, and I wanted to make clear that this was not what I was talking about. This blog entry is about writing Perl code whose configuration changes are limited to a lexical scope, just like built-in pragmata such as strict or warnings.

END_OF_DOCUMENT_TOKEN_TO_BE_REPLACED

These are some answers to the Week 145 of the Perl Weekly Challenge organized by Mohammad S. Anwar.

Spoiler Alert: This weekly challenge deadline is due in a few days from now (on January 2, 2022 at 24:00). This blog post offers some solutions to this challenge, please don’t read on if you intend to complete the challenge on your own.

This first task of this week’s challenge was covered in this blog post.

You are given a string $s.

Write a script to create a Palindromic Tree for the given string.

I found this blog explaining Palindromic Tree in detail.

END_OF_DOCUMENT_TOKEN_TO_BE_REPLACED

In 2022, the German Perl/Raku Workshop will take place in Leipzig. We are very happy to announce that long time Perl supporter Geizhals Preisvergleich sponsor the workshop.

END_OF_DOCUMENT_TOKEN_TO_BE_REPLACED

Why ? Because I can. More seriously I have a project where I need to inject new Snes code in a running game and I want to express directly this new code in my Raku component (A webserver service). I want to have special sub that returns me Snes bytecode but that contains Snes assembler.

I tried injecting a SLANG in Raku already. Like writing my $byte-code = SNES lda $42; sta $54; rtl; But it’s rather tricky and I will probably just have a additional Slang with its own grammar in a dedicated file.

END_OF_DOCUMENT_TOKEN_TO_BE_REPLACED

I'll stop reminding you that... I DO NOT KNOW WHAT I AM DOING.

What is ANSI Game Engine?

Well, at it's core, ANSI Game Engine is a very colourful and interactive telnet server.

END_OF_DOCUMENT_TOKEN_TO_BE_REPLACED

These are some answers to the Week 145 of the Perl Weekly Challenge organized by Mohammad S. Anwar.

Spoiler Alert: This weekly challenge deadline is due in a few days from now (on January 2, 2022 at 24:00). This blog post offers some solutions to this challenge, please don’t read on if you intend to complete the challenge on your own.

An important point is that we are told that the arrays have the same size. Thus, we don’t need to check that. We’ll also assume that they contain only numbers.

END_OF_DOCUMENT_TOKEN_TO_BE_REPLACED

... computer language design is just like a stroll in the park. Jurassic Park, that is. -- Larry Wall

Perl's grammar is inherently ambiguous. That is, it is possible for a syntactically correct chunk of Perl to have more than one valid interpretation. Maybe this is because Larry Wall is a linguist? After all, natural languages are full of ambiguity.

The ambiguous warning is part of the group syntax; that is to say, use warning 'syntax'; enables ambiguous, as well as other warnings in that group. Of course, if appropriate you can just use warning 'ambiguous'; if more precision is justified. Both warnings go back to Perl 5.6, when the warnings pragma itself was introduced.

As has become habitual, I present a random selection of instances of this warning. Normal text is from perldiag. Italicized text is mine.

END_OF_DOCUMENT_TOKEN_TO_BE_REPLACED

This blog post addresses checksum and signature verification vulnerabilities affecting CPAN, the cpan client, and the cpanm client, which were published in a security advisory on 23rd November 2021. If you're not aware of this topic, you might like to start by reading the advisory. This post gives a high-level description of the issues, what has been done to address them, what is still left to do, and what you should do. If you have any questions on this, you can add comments here, or email the PAUSE admins (modules at perl dot org).

Before we dig into the details, we'll first give an overview of how the relevant parts of the CPAN ecosystem work.

If you're not interested in the details, skip to the section "What do you need to do?"

TL;DR: make sure your CPAN client uses https and a trusted mirror – such as cpan.org

END_OF_DOCUMENT_TOKEN_TO_BE_REPLACED END_OF_DOCUMENT_TOKEN_TO_BE_REPLACED

These are some answers to the Week 144 of the Perl Weekly Challenge organized by Mohammad S. Anwar.

Spoiler Alert: This weekly challenge deadline is due in a few days from now (on December 26, 2021 at 24:00). This blog post offers some solutions to this challenge, please don’t read on if you intend to complete the challenge on your own.

Write a script to generate all Semiprime number <= 100.

For more information about Semiprime, please checkout the Wikipedia page.

END_OF_DOCUMENT_TOKEN_TO_BE_REPLACED

Warnings category syntax contains a number of sub-categories representing possibly-problematic syntax. These include ambiguous syntax, problematic bareword usage, invalid printf conversions, and more. But there are also syntax diagnostics that do not fall under any of the sub-categories. These tend to be a miscellaneous group, and a normal-sized blog post can do no more than to give a sample.

What brought this to my attention was a noisy test in Template-Toolkit. under Perl 5.35.2 and up. The noisy code was untainting a variable using code like

This makes use of the fact that hash keys are (so far) never tainted. The new warning was each on anonymous hash will always start from the beginning.