I love CPANtesters and Travis-CI

I have mentioned before how much I like CPANtesters! Here is another story.

Yesterday I got an email from them listing a number of failures from Galileo, my CMS. I had recently pushed some bugfix releases, but it had some new, and as yet unused code and tests for that code in it. The tests passed on all my Linux systems, so I wasn’t worried about the release. Yet the failures came in. Some on Linux, some on other platforms, but not all the tests were failures and I couldn’t figure out a pattern. CPANtesters put me on to a problem but for this I needed faster results.

I had heard about Travis-CI, a free continuous integration platform based around GitHub. I set up travis testing for Galileo and sure enough it failed there. Though it was frustrating I now had failing tests that I could run at will! After much trial and error, I found that I had an undeclared dependency, but due to the way I was testing, it was throwing a seemingly unrelated error. My problem was that all my systems have the module installed and so I didn’t get the failure on my box, its a common module File::Next (used by Ack) and so many of the CPANtesters had it as well.

CPANtesters alerted me to the problem and Travis-CI let me continuously test on fresh platforms (5.10/12/14/16) until I found the problem. I love open source.

I have released Galileo 0.026 which fixes the problem. There are exciting additions to Galileo in the works, slowed only by my upcoming Ph.D. defense (which obviously takes much of my time). I hope that by this summer Galileo will have several of the most requested features you have told me that you would like.

Happy Perl-ing and remember to thank those projects and developers who make your lives easier, both in person and in public. Thanks guys!

END_OF_DOCUMENT_TOKEN_TO_BE_REPLACED

Just a little note to announce the release of Galileo version 0.023. Galileo is my CMS that aims to be 100% CPAN installable, all you have to do is this:

This release makes installing even better, because now when you run galileo setup you get a web interface to configure your CMS and then install the database! 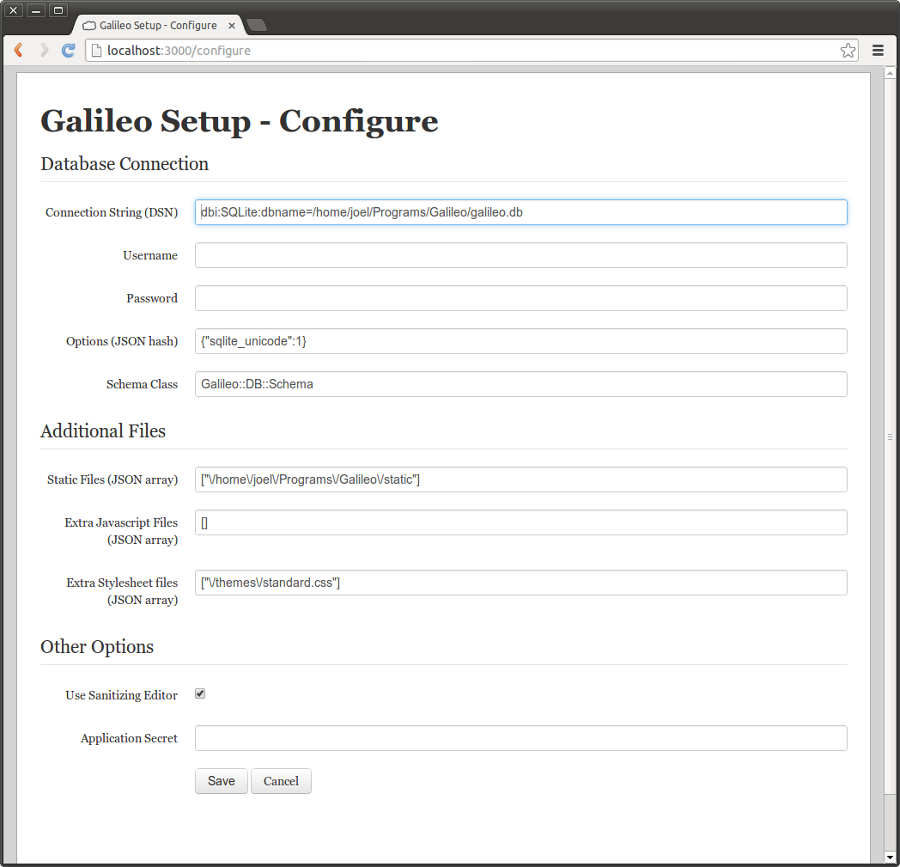 Ok that image is just slightly ahead of what is now on CPAN, but its close :-)

END_OF_DOCUMENT_TOKEN_TO_BE_REPLACED

I just wanted to drop a quick note to announce #galileo on irc.perl.org as a place to talk about Galileo my CPAN installable CMS and its new companion project GalileoSend which isn’t quite to CPAN yet, but it will be soon.

GalileoSend will make sending files via websocket easy! So far the package includes a command-line sender (client) and receiver (listener/server), a Mojolicious plugin and a javascript client. Futher GalileoSend is a protocol spec, which means if you want to write a client or server in your other favorite language, or a plugin for your favorite framework, its very possible.

END_OF_DOCUMENT_TOKEN_TO_BE_REPLACED

A new protocol for sending files over websockets

Today I’m happy to make public the work I’ve been doing to make some kind of “standard” for sending files over websockets. I call it GalileoSend because it was created for the Galileo CMS.

The protocol itself is language independent for both the client and server side, assuming that both can open a websocket connection and send JSON (as text) and binary data over it. Since communication by websocket is cheap, 2-way communication is highly encouraged throughout the transfer and positive confirmation of receipt is required.

END_OF_DOCUMENT_TOKEN_TO_BE_REPLACED

Galileo is a simple but modern Perl CMS which is totally installable from CPAN. Just a few quick commands and the site is live and usable! The primary focus is small sites, which need immediate availability and easy (no?) administration. All content is written in a markdown editor in the browser and saved live via websockets with no reload.

This morning I released the newest version of Galileo with several improvements that have been in waiting for months. Among the most exciting is preliminary support for in-place database upgrades via DBIx::Class::DeploymentHandler.

In addition, Mojolicious author Sebastian Riedel made an extra effort to ease the testing of JSON messages passed via websockets. This means that Galileo’s two-way communications between the browser and the server are now even more robust and better tested. Further, this move has made unicode handling more reliable (since websocket unicode handling has its own quirks) so I can now say that Galileo should be unicode friendly! Thanks SRI!

EDIT: I have now released a few nit-fixes so the release number is now 0.015. This should ease installation in some situations and on more platforms.

END_OF_DOCUMENT_TOKEN_TO_BE_REPLACED

The next Galileo will allow database upgrades

I wrote Galileo partially as a reason to learn DBIx::Class. For those of you who may not know, Galileo is my CMS, designed to be completely installable from CPAN.

As a scientist I’m not very proficient as a database admin. Part of what I love about DBIx::Class is that I didn’t have to learn database administration or SQL, it does that for me. Perhaps I had gotten a little overconfident.

END_OF_DOCUMENT_TOKEN_TO_BE_REPLACED

After a wonderful vacation, I came back to discover that I had far more work to do than I had realized. I have only just started to claw out of the heap and arrive at a place where I have had some time for Perl-ing.

First of all I need to apologize. I missed my Grant Report this month. While this is no excuse, there also was nothing to report. I do hope to keep honing in on the few remaining problems that Alien::Base has developed, but I am increasingly believing that a few of my initial assumptions may have been too flawed, possibly requiring a little bit of rewrite. That said, what I really need is someone who has a longer beard than I (metaphorically) to help me understand some Makefile/linking stuff to help me over the hump.

That brings me to some more interesting things. I had almost gotten my additions to vti’s PerlTuts running before my vacation, and now they have finally hit; thats right, live science tutorials in Perl are coming! For now its only a few pages on my plotting extension and PDL constructors, but believe me, that was the hard part.

Finally, this weekend I added up a few more features to Galileo, these include such novel features as deleting pages and easy links to adding users and pages. For those of you who don’t know (many I’m sure), Galileo is my attempt at a fully CPAN installable content management system (website). Its runs on Mojolicious and uses websockets for real-time updating wherever possible. Please take a look and let me know if you have any issues; especially if you use the (still untested, sorry) environment variables for controlling file locations.

END_OF_DOCUMENT_TOKEN_TO_BE_REPLACED

While I have been on vacation, I have found a little time to add some polish to Galileo, my recently released CMS. Recent additions include a utility for writing a mostly generic configuration file and administrative popups which explain how to create new pages or add new users. The most important thing I have added though is some more setup-time documentation! Hopefully people will now find it even easier to get a Galileo-based CMS up and running.

In writing the documentation, however, I was faced with a question that I do not know the answer to: do any other plack-based or otherwise Mojolicious compatible Perl webservers (i.e. plackup, starman, twiggy etc) support websockets? While in principle a Mojolicious app can run under all of these, Galileo depends heavily on websockets, especially for content editing.

I have more ideas for improvements to Galileo, but they will take a little more work than I want to put in here on vacation. In the meantime it is still very functional, go take a peak. :-)

END_OF_DOCUMENT_TOKEN_TO_BE_REPLACED

I am happy to announce that Galileo CMS is now available from CPAN! This project has been my on-train side-project, but its come a long way in a short time. The most exciting thing for me is that its entirely installable from CPAN. To try it out, simply do

of course, you can also run it using the servers provided by Mojolicious, or using your favorite psgi-compliant server (as long as they support websockets).

Authorized users edit pages using markdown with a live-preview. All updates to pages, menus and users are sent via websockets. Styling is courtesy of Twitter’s Bootstrap library.

By default it uses an SQLite database, and indeed this is all its been tested on, but in principle it can use anything that DBIx::Class supports. All other dependencies are available from CPAN, with the exception of the javascript libraries, which are bundled with the distribution.

Unfortunately I missed the deadline for Perl Weekly, but I did get it out before I go on vacation tomorrow, and I’m excited that I made that goal. So please, try it out; though probably not for anything mission-critical yet.

Let me know what you think!